Polls Related to James Garner
Information accurate as of September 24, 2019

James Garner, RIP
James Garner worked for decades before passing away this July. Which of his top roles was your favorite?
https://web.archive.org/web/20171122235627/http://www.imdb.com/poll/TnaB-kt1F8A/results
Sadly, this poll is no longer available on IMDb because IMDb no longer supports character lists and polls based on character lists.

You have been tasked with saving your small Mexican village from an evil gang and must recruit seven of the greatest film Cowboys to protect and save your people. From this group of western stars (from the silent film era to the present), where do you start? Which is the most "Magnificent" of your seven?
Note: Members of the cast of The Magnificent Seven (Charles Bronson, Robert Vaughnn, Steve McQueen, etc.) are excluded from this list... as they have already busy saving a different village.

You have committed a crime and you are sentenced to jail. With whom of these imprisoned characters would you like to hang out with?

Who's your favorite Philip Marlowe?

Which of these actors takes the title of the "King of Cool" in the 1960s?

Which of these romantic character parings of a guy from the U.S. and a girl from Europe makes the most memorable love story?

Which movie-related James comes to your mind when you hear the name ?

Some of the best romances of the big screen are set in war times. Which one is your favorite ?

Okay, so it is the mid-sixties and you are casting a brand new television series about the Starship Enterprise that is going to be called "Star Trek (1966)." This guy named William Shatner has auditioned for the part of series star Captain James Kirk, but you think that he's too "over the top" and campy in his performance. You want someone more dramatic and with more acting skills (dramatic, romantic, physical, and comedic abilities required). Which actor from that era would you choose?
Note: He has to be at least 30 years old (and under 60) and active in Hollywood by 1966.

Which of these people we lost in 2014 will you miss most?

The Lifetime Achievement Award has been presented most years since 1962 by the Screen Actor's Guild (SAG). Which recipient since 2000 is your favorite performer?

Which of these gangs or groups of people from the IMDb Top 250 Movies is the most memorable?
After voting, you may discuss the poll here.

These James' on the list are in STARmeter order as of 02-09-19. Let's see if our top James' match up in this poll. Will the bottom of the poll beat the top? Can James Dean beat out James McAvoy? Let's see. Who is your favorite actor with the name James?

From this list of IMDb Poll Board Members' favorite TV quotes, which one is your favorite?

Choice: 10 votes out of 1,325
James Garner In charater for the Television show "Maverick" circa 1960 Photo by Joe Shere
"As my pappy used to say, it would be a pitiful thing if I ever tried to work for a living. "Son," he said, "Use your wits, 'cause the Lord didn't give you brains.'" from: Maverick (1957)
misspaddylee's favorite.

Of these animated Disney villains, who do you think is the scariest?

Who is the Most Iconic US TV Detective from the 1970-1990s? To be considered they must primarily work alone and had a series that lasted at least two seasons.
After voting, please discuss here.

Denzel Washington's latest is a version of The Equalizer (1985) TV show starring Edward Woodward as a private detective helping his clients seek justice. Which of these TV crime fighters (no super heroes, please) who haven't already appeared in a film would make the most compelling leap to the big screen?

Which of these actresses did the most convincing job at enacting a male character or a female character pretending to be a man in the movie/show?

Which movie or television astronaut crew do you think had the best chemistry and worked well as a team?

World War II ended 70 years ago on September 2, 1945. From this list of real and fictional famous war heroes, whom do you respect the most?
Discuss the poll here

If you could adopt an extra grandparent, which of these people would you choose?

Which of these Audrey Hepburn couples is your favorite?
Discuss the list here!

Choice: 4 votes out of 323
Audrey Hepburn and James Garner in The Children's Hour (1961)
Karen Wright and Dr. Joe Cardin

Wyatt Earp's story has been chronicled in many movies and TV shows over the years. According to Wikipedia, he was a physically imposing figure for his day, was very capable of using his fists instead of his weapon to control those resisting his authority, and was reputed to be an expert with a pistol. He showed no fear of any man. His deputy Jimmy Cairns described Wyatt as "the most dependable man I ever knew; a quiet, unassuming chap who never drank and in all respects a clean young fellow". Wyatt's manner, though friendly, suggested a quiet reserve...

Choice: 26 votes out of 603
James Garner
in Sunset and Hour of the Gun

It's the most wonderful time of the year... Shark Week started on July 22nd and runs through to the 29th. But the deadliest sharks don't always swim in the ocean.
Which of these corporate sharks do you most hope will stay off your tail?
Want to talk about it? Click here!

The ordinary park bench has played an iconic role in many movies. From this list of park bench* scenes, where at least one person and no more than two are sitting down, which is your favorite?
*in a public park, private garden or in close proximity to a park
Discuss here

Sixth Anniversary of the IMDb Poll

Happy sixth anniversary!
The current version of the IMDb Poll went live on September 4, 2013. This achievement is due to the creativity and efforts of the 375 authors with published polls, more than 1000 people who suggested polls and the thousands of IMDb users who vote in these polls.
Thank you Col Needham for trusting the IMDb user community to run the poll on a day to day basis.
Special thanks go to two members of IMDb’s technical staff who implemented the poll and provided guidance and technical support for the first two years. Thanks also go to the IMDb Editors (who have provided support and guidance on polls since June 2015) and the other IMDb Poll admins.
Summary Statistics

Superlatives:
Polls by Date
First Poll: Who Is the Nastiest Villain?
by muzzle
Most Current Poll: IMDb Poll Board Favorite Live Poll - Part 2
by Son_of_albstein
Polls By Vote
Poll with Most Votes: Best Movie to Have Been the IMDb Top 250 #1
by Mega_wizard
Hotly Contested Polls
Most Contested: Emmys 2018 — Outstanding Lead Actress in a Drama Series
by simeon-83777

Anniversaries and Other Milestones

Top 10 Active Polls With Most Votes
Polls by Vote
Best Movie to Have Been the IMDb Top 250 #1
Most Anticipated Sequel of 2018
Most Anticipated Movie of 2019
Most Anticipated Film of Spring 2017
Marvel or DC?
Who Should Be the Next 007?
Greatest TV Villains of All Time
Top 25 sequels better than the original ...
Face-Off: Dawn of Justice vs Civil War
Most Anticipated Blockbuster of 2017 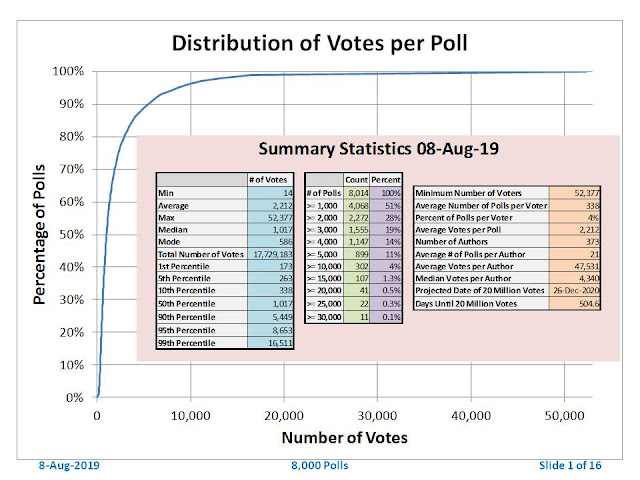 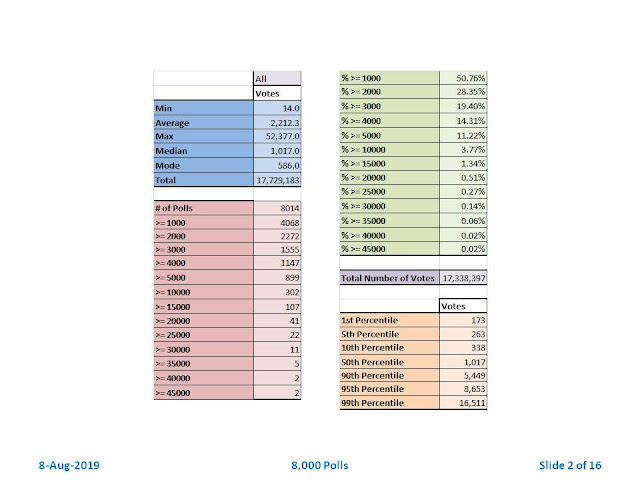 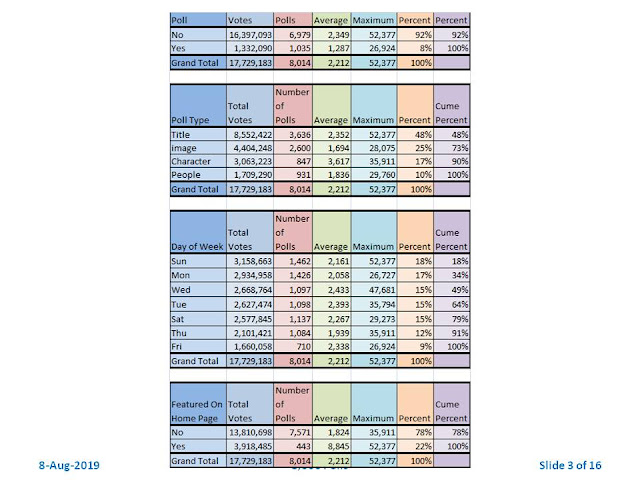 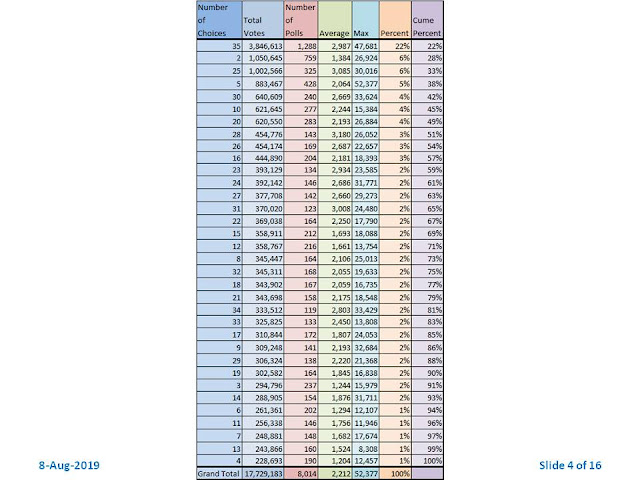 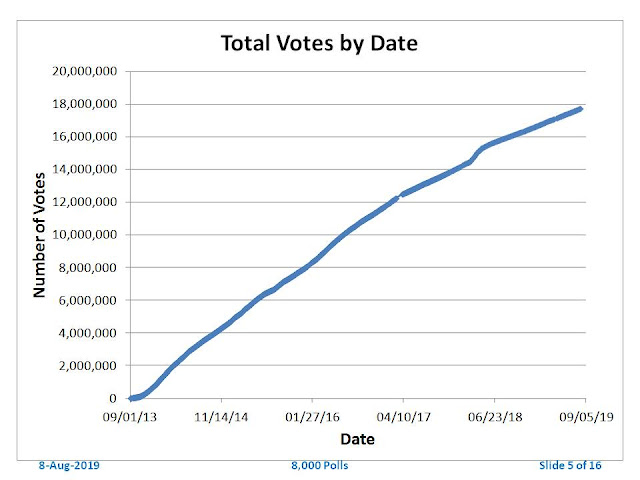 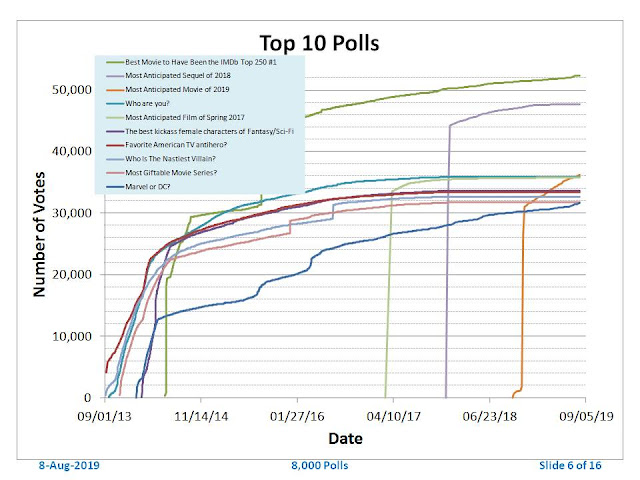 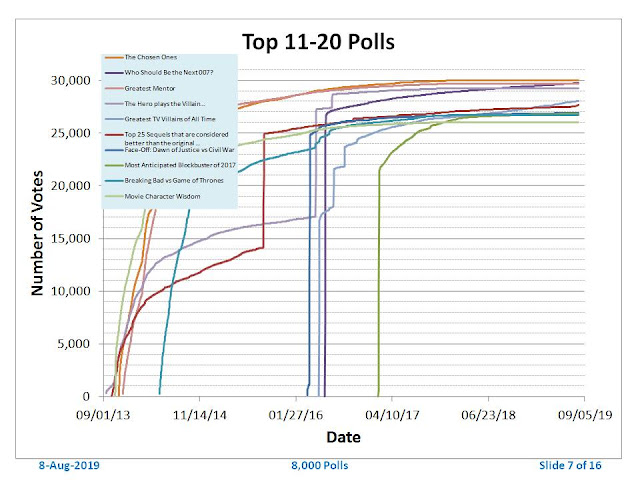 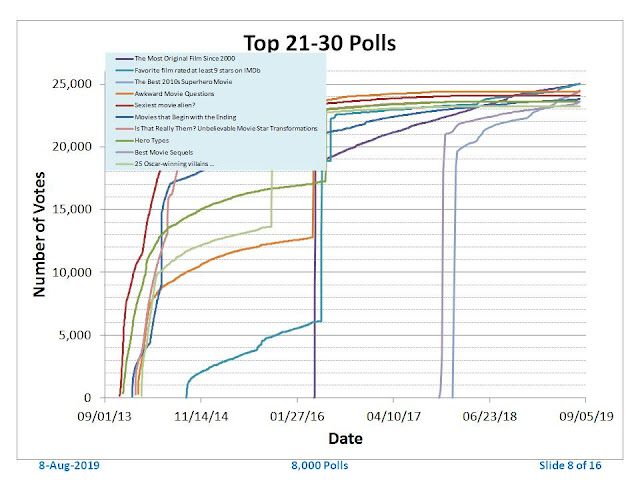 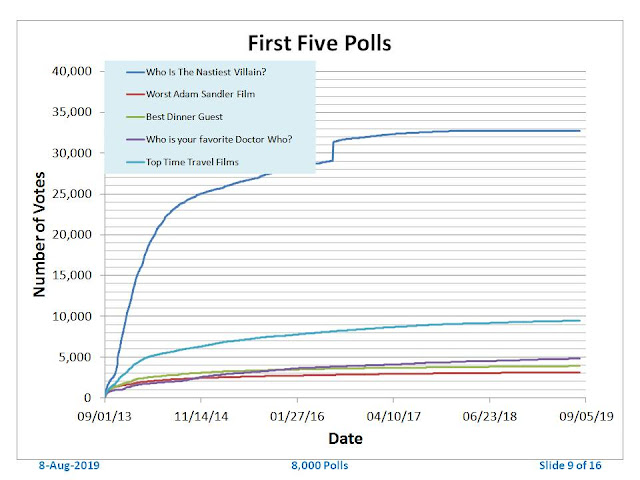 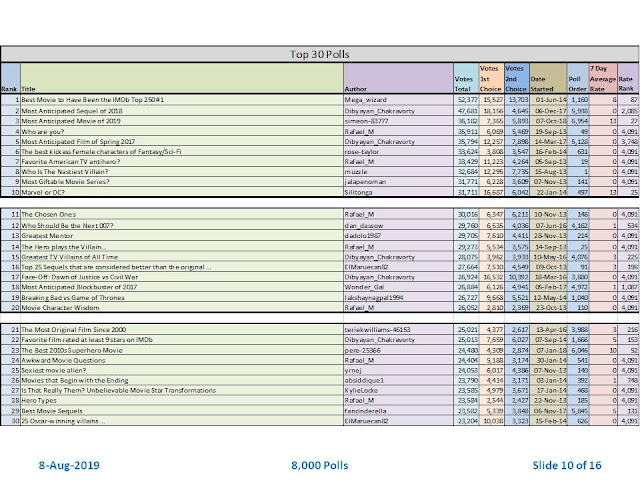 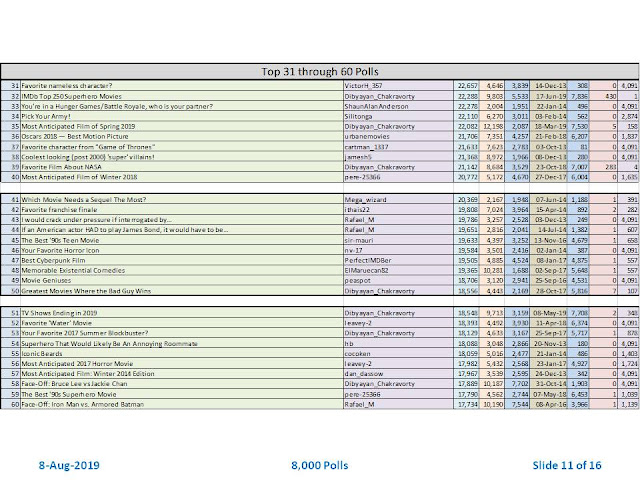 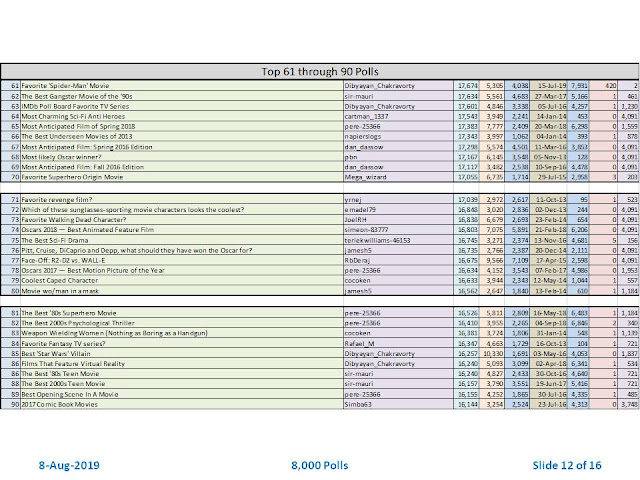 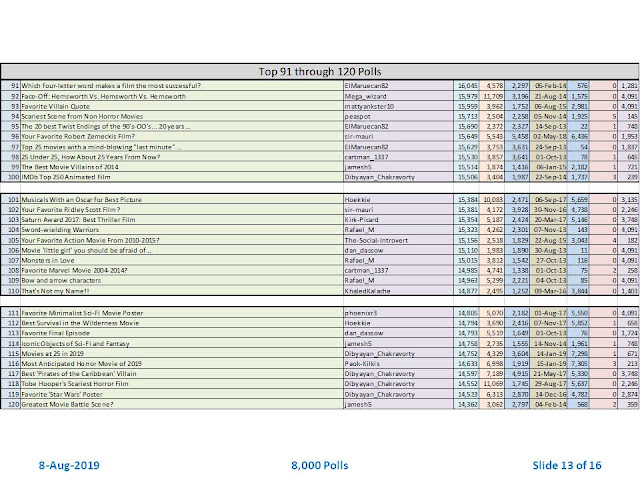 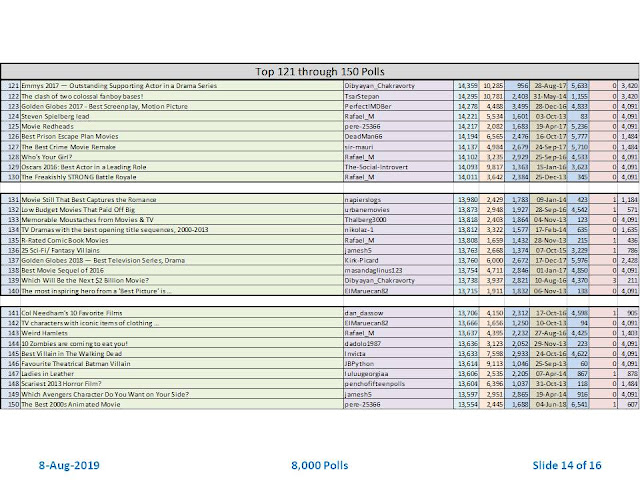 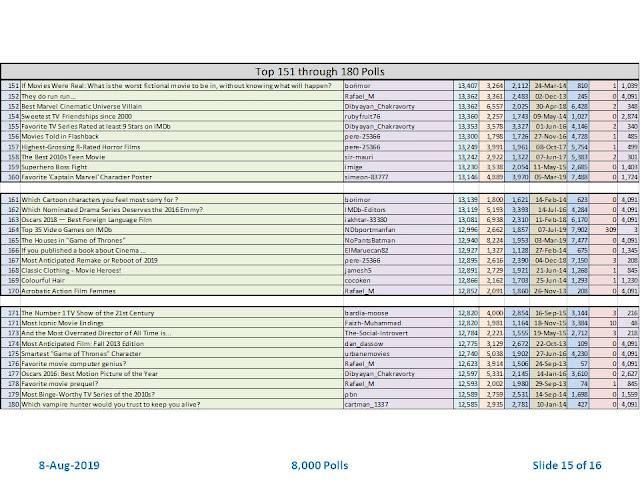 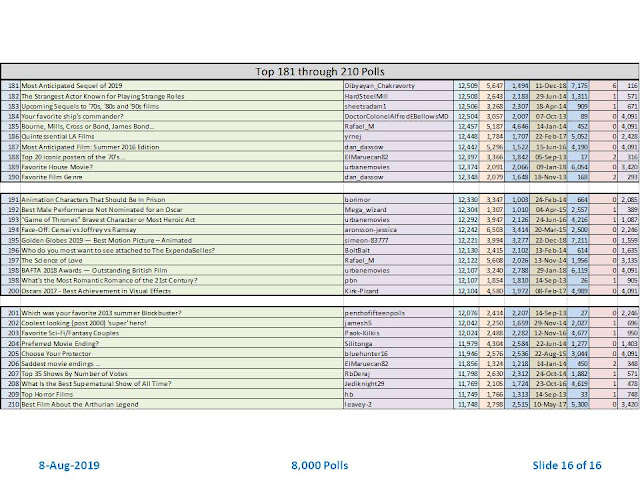 - Oscars 2019 — Best Performance by an Actress in a Supporting Role
Poll: Rachel Weisz in The Favourite (2018)

- Which Is the Biggest Surprise of the 2019 Oscar Nominations?
Poll:  Black Panther becoming the first superhero film nominated for Best Picture, but having its entire cast snubbed.

- What's Your Take on Black Panther's Best Picture Oscar Nomination?
Poll: This makes no sense! There were better superhero movies that didn't get a nomination for Best Picture.

- When the Villain Wins an Oscar
Poll: The Joker (Heath Ledger) in The Dark Knight

Just because a poll has not gone live, does not mean that it is not a worthy candidate for going live in the future. It takes time and effort to develop a poll that is both enjoyable to take and meets IMDb's minimum standards. Polls with very clear criteria that limit their scope, are well written and unique generally go live faster than polls that have broad criteria. The IMDb Poll message board receives on average between five and ten poll suggestions per day. If you see a poll you like that has not gone live, you can help get that poll noticed by casting a straw vote or making constructive suggestions in the poll suggestion thread. On average it takes 79.6 days to go live. Fifty percent (the median or 50 percentile) of polls go live in 11.2 days. Here are some plots that show how long a poll takes to go live: 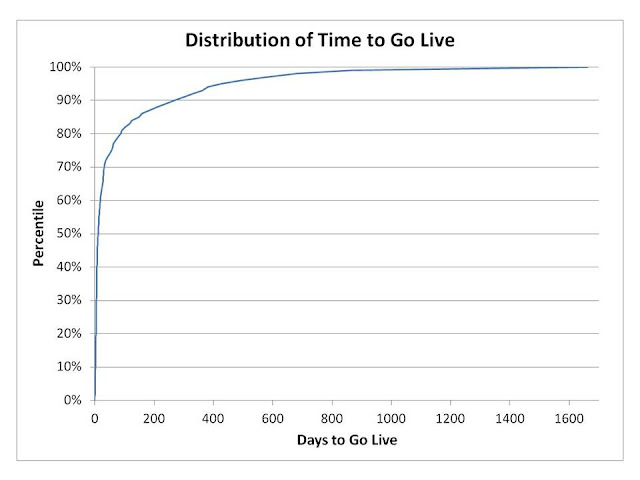 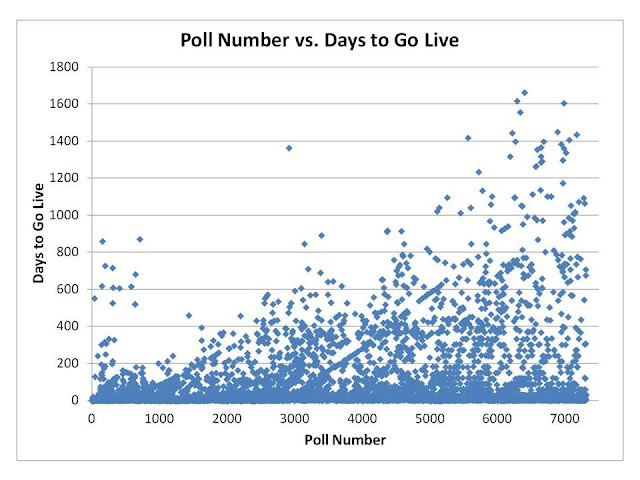 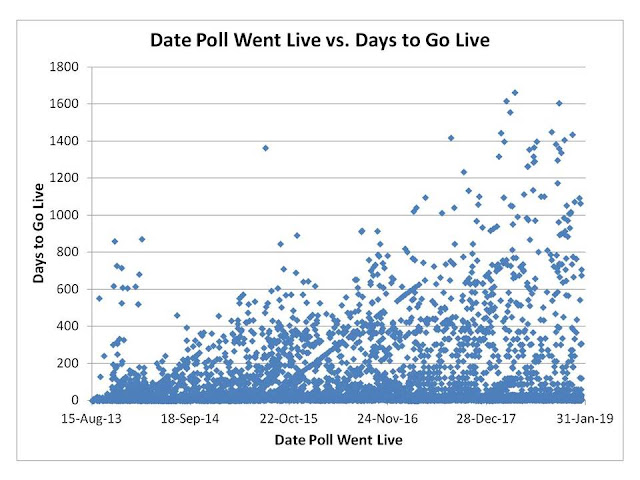 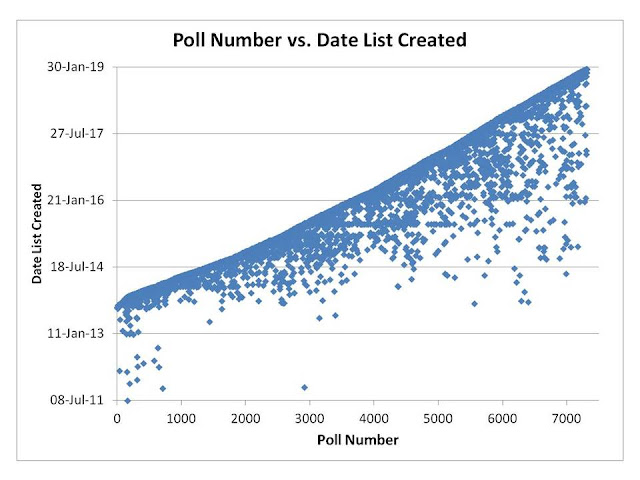 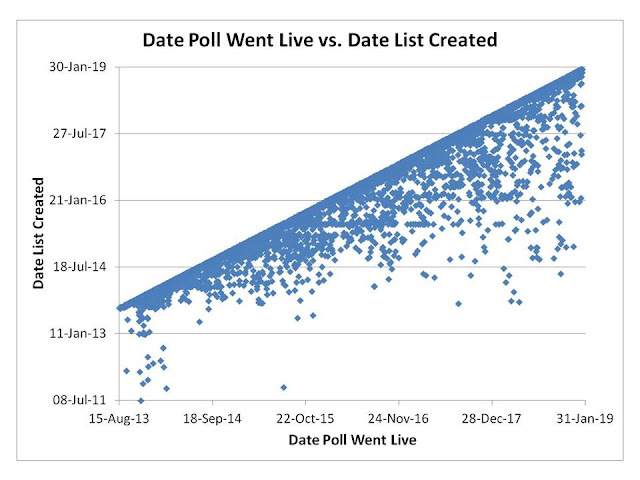 Posted by Dan Dassow at 7:03 PM No comments: